Challenge: When Rabbi Leo Trepp died at the age of 97 in 2010, he was the last surviving Rabbi that was a practicing Rabbi in Germany on the night of Kristallnacht, an anti-Semitic pogrom that took place on the night of November 9, 1938. Trepp was arrested and placed in a concentration camp where he was held as one of 30,000 Jews who were arrested and held by the Nazis. 18 days after his incarceration, he was released through the intervention of the Chief Rabbi of the United Kingdom—under the condition that he and his wife had two weeks to leave the country. Trepp came to the United States in 1940. He ultimately moved to Northern California, where he led three congregations.

In 2009, Trepp was the subject of a German language documentary film Der Letzte Rabbiner by Christian Walther.

A philanthropic disciple of Trepp’s was interested in showing the film at the Osher Marin JCC. Greene Creative was commissioned to find a solution of more than just subtitles.  After we had the entire script translated, and written for narration, we were able to secure Rabbi Trepp’s participation. Even though many recording sessions in his San Francisco apartment were postponed due to ill health, he was still well enough to record the audio as the German original was played back.

Solution: Greene Creative was secured to create the new version, but since Rabbi Trepp was still alive in San Francisco, we proposed that in addition to subtitles in the appropriate places, a completely new English audio track be created. Along with new English narration based on the German script, both Trepp and his wife Gunda participated in recording their own english voice overs from the exact text of the original footage.

Retitled The Last Rabbi, the newly created documentary was premiered in Marin County to an audience of hundreds.  Rabbi Trepp appeared at the premiere and answered questions from the audience. This was to be the last public appearance of Rabbi Trepp in the United States as he died a few months later while teaching in Germany. 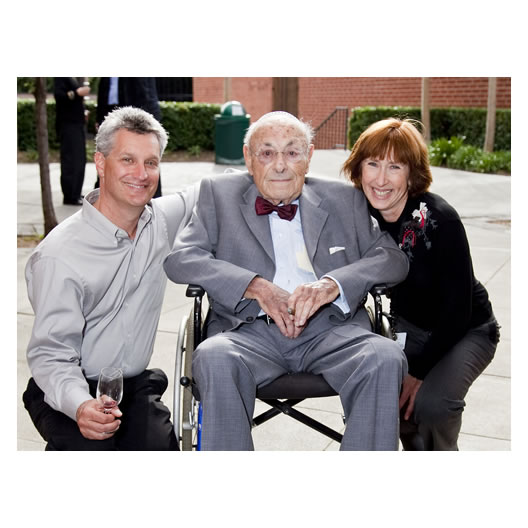 Big or small, we can provide a solution to fit your needs. In fact, Greene Creative frequently handles a wide range of communication demands for our clients by offering stellar service at competitive rates, with little to no “hand holding” required.

We look forward to hearing from you!